The Twin Nuclei Problem of Cell and Atom is the recognition that having gained the power to manipulate cellular and atomic nuclei between 1952 and 1953, humanity is now in possession of unprecedented destructive power, and thus capable of self-extinction. All of human civilization is now one correlated experiment, and any sufficiently large event may be enough to end it, limiting its long-term future. That such an event has not yet occurred is largely a function of growth and luck. Since the early 1970s, growth has stagnated in all but a few economic activities, and as evidenced by the coronavirus pandemic, luck is fragile and running out. Eric Weinstein first publicly introduced the idea in his first appearance on The Rubin Report on January 6, 2017.

Mushroom cloud from the first detonation of a Teller-Ulam staged-fusion device.

The conditions for the Twin Nuclei Problem began at the end of World War II, with the use of atomic fission bombs on the cities of Hiroshima and Nagasaki to force Japan's surrender. 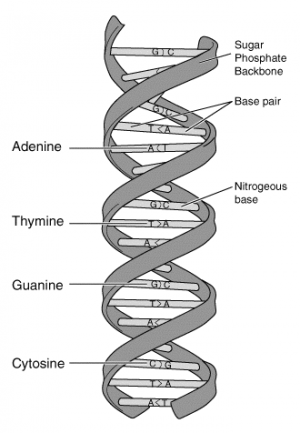 In 1953, Watson and Crick discovered the 3-dimensional structure of DNA.

The Big Nap is the history accompanying the Twin Nuclei Problem, and describes the transition from broad growth to the operation of society characterized by magical thinking, that nothing truly bad can happen.

At least one of the following must occur for the Problem to be solved, with or without a long-term human future. No possibility is sane.

A community video illustrating the subject.

A clip from Episode 18 of The Portal Podcast.

In 1945 we ended WWII with atomic devices. This was the end of conventional massive armed conflict.

Between 1952-54 we cracked the twin nuclei of atoms (Hydrogen fusion bombs) and cells (3-d structure of DNA).

We now live on borrowed time determined largely by luck, growth and the memory of WWII.

Our growth ran out, then our memory of WWII. We now live on Luck.

This has created a world wide epidemic of magical thinking that nothing truly bad can still happen.

During this period Derek de Solla Price discovered that science was on an unsustainable exponential.

He published 'Science Since Babylon' (1959?) predicting an end to scientific growth.

During the 1945-1972 era, institutions built in assumptions about their future growth.

Those Embedded Growth Obligations or E.G.0.s are now unsustainable.

This has caused nearly all institutions to be headed by people willing to lie to keep the institutions alive.

There are a small number of fields where growth kept going (E.g. semiconductors, communications, and their outgrowths).

Mostly the world stagnated by the standards of the past around 1972.

Between 1972 and 2008 a long period of managed fake growth took place to disguise the end of the post WWII growth regime.

Starting in the 1990s this Davos style economics began to result in massive wealth inequality in the developed world under a fig leaf of idealism.

By 2008, fake growth became unsustainable and the world woke up from a crazy dream of "The Great Moderation' to sanity.

It was that sanity that made the markets "go crazy."

Since 2008, no one really believes in market absolutism nor in government fairness nor in banking. But, oddly, we can't form new economic theories.

This zombie period lasted from 2008 until 2016 where the Trump and Brexit votes shocked the rent-seeking elite.

We are now trying to have new ideas. It is very difficult for them to form given the level of inequality.

As for the decision trees: if humanity is to have a future greater than 500 years with fusion devices and other horrors, what must happen?