From The Portal Wiki
Jump to navigation Jump to search
This article is actively maintained as a subproject of The Portal Wiki. You can help us by contributing to this page.

The book Science Since Babylon was written by Derek J. de Solla Price based on a series of five lectures he delivered at Yale University's Sterling Memorial Library in October and November 1959 on the history of science. In 1961 it was published in London and New Haven by Yale University Press, and sold as a Yale Paperbound (paperback) in 1962. It is notable due to Price's observation of the exponential trajectory of scientific growth, and his subsequent prediction of that growth leveling off due to saturation. The 1975 enlarged edition expanded on the original material and also included new material, some of which were previously published essays or sections of previously published books. The book is often cited by Eric Weinstein for its observations about growth. Weinstein also notes that it is odd how few people know about this book given the implications of its predictions for science and research.

An Open Access PDF of the book is available here. 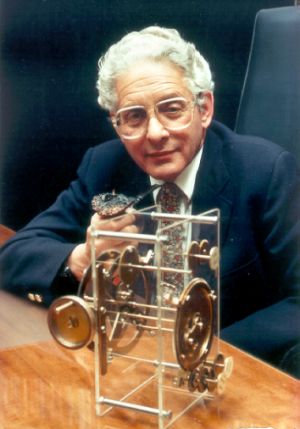 Derek de Solla Price with a model of the Antikythera Mechanism

to the Enlarged Edition[edit | edit source]

Now, more than ever, science if being used as the hammer to solve all of society’s problems. Thus taking it away from it’s true purpose.

“Today as never before, our higher educational system and the cul­ture it enfolds teeter critically on a sharp division between education in the ancient sense of the term and a somewhat blatantly utilitarian viewpoint in which science is seen as a begetter of technological fixes for national needs.”

“Science is a very ex­ceptional and peculiar activity of all mankind, and one is not at liberty to regard it as that which can be applied to make technology.”

This new edition has 3 extra chapters:

“I hoped, in addition, to show scientists that we ought to be able to talk about science with as much scholarly right as other humanists receive, and that our approach might (if successful) lead to a different or better understanding than one could get by just "doing” science.”

This book is centered around crises, vital decisions that had to be taken in order for civilization to turn out the way it did.

The 5 lectures this book is based on are broken down as follows:

1. The Peculiarity of a Scientific Civilization[edit | edit source]

Science is a cornerstone of the modern (western) world.

To understand this importance, Price is going to look back through history highlighting pivotal moment, moment where people had to change the way they thought.

Just because a society has developed components of science, even if to a high level, it does not make it scientific.

“It is a delicately subtle historical error to carry back too rigor­ously the compartmentalization of science before the six­teenth century, when learning was much more a single realm and even the genius was a polymath.”

The Almagest, an astronomy book, provides a direct line between the science of the Hellenistic period Greeks and the Scientific revolution through Copernicuss important to the endeavour of this chapter

A peculiar problem is it that “one successful textbook to extinguish auto­matically and (in those times) eradicate nearly all traces of what had gone before.” - It is widely assumed (hoped even) that whatever came before was indeed inferior in every way. - This hope was entirely misplaces, as in 1881 a great amount of Babylonian mathematics and astronomy was discovered.

Babylonian mathematical astronomy was equal in competency to that of the Greeks, “but vastly different in content and mode of opera­tion.”

The Babylonians and the Greeks approached math in completely different ways:

Ancient China was isolated from both Babylon and Greece. Despite this, they came up with both geometry and arithmetic skills. And yet, “is it not a mystery that, having both essential components of Hellenistic astronomy, they came nowhere near developing a mathematical synthesis, like the Almagest, that would have produced, in the fulness of time, a Chinese Kepler, Chinese Newton, and Chinese Einstein?”

Price argues (and quotes Einstein, mention of a Chinese Einstein prompts me to cite here the text of a letter by the Western Einstein" ) that China’s course is the norm; by creating what we know as science, western culture is the strange anomaly.

During the centuries after Alexander the Great, math (which could only have come from Babylon) slowly enters the Greek math and astronomy.

This sudden merging of Greek and Babylonian math, targeting the same problem but from different angles, is one of the pivotal moments Price talks about.

“It has become usual to refer to the postponed scientific revolution in chemistry and the still more delayed freeing of the life sciences from their primitive states, and then to seek reasons for the tardiness of these changes. Once more this conventional attack may be fruitlessly seeking an explanation for what was, after all, the normal way of growth. Physics was forced early by the success of its neighbour subject astronomy, and when chem­istry and biology develop, it seems very much as if the moti­vating forces are not internal but rather a pressure from the successes of physics and later chemistry.”

“Philosophers of science generally consider only one possibility: science, as it is known to us, has an essen­tial mathematical backbone.”

“Since the historical origin of that backbone seems such a remarkable caprice of fate, one may wonder whether science would have been at all possible and, if so, what form it might have taken if a situation had existed in China which caused the chemical and biological sciences to make great advances before astronomy and physics.”

Price argues that the consistently poor results of certain children with mathematics is so long standing that it cannot be merely “bad teaching”.

3. Automata and the Origins of Mechanism and Mechanistic Philosophy[edit | edit source]

"One can be reasonably surprised that any accurate law holds over such a large factor of increase. Indeed, it is within the common experience that the law of exponential growth is too spectacular to be obeyed for very long. Large factors usually introduce some more-than-quantitative change that alters the process." p 169

"Alternatively, one can say that science has been growing so rapidly that all else, by comparison, has been almost stationary." p 177