In broad terms, the model is a tool for illustrating how the media stigmatizes certain nuanced views that challenge the status quo by portraying people who hold those views as prejudiced or intolerant. The model brings to light the subtle ways that Legacy Media undergirds and upholds Gated Institutional Narratives.

People who believe they can infer someone’s true intentions, beliefs or morality based on their support for, or opposition to, the policy initiative.

The individuals that hold nuanced positions that oppose the policy on the x-axis, but support the moral virtue on the y-axis. In the words of Eric Weinstein, “These are people who are thinking for themselves, and are not buying baked-cakes. They’re buying the ingredients and they’re saying, well, I want more of this ingredient, I don’t like that ingredient. So they’re attempting to avoid having any pre-baked idea put in front of them.”

Those who oppose the x-axis policy and possess the moral vice represented by the lower-half of the y-axis (e.g. sexists, racists, bigots, etc).

"Woke" people or companies who have a vested-interest in the x-axis policy because they profit from it, but do not produce much or anything of value in return. 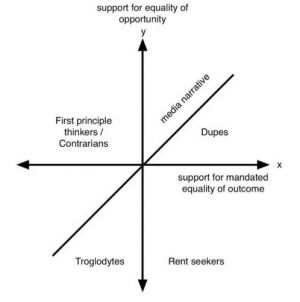 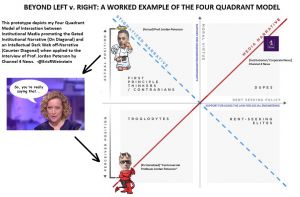 The horizontal line (or x-axis in mathematical terms) represents one’s level of support for a particular policy initiative. For example, if the topic at hand is regarding equal opportunity or the fair treatment of people, the positive x-axis would be stances in favor of equal opportunity and the fair treatment of people. Individuals on the negative x-axis disagree with the policy or are critical of it.

The vertical line (y-axis) represents some kind of moral virtue. Individuals in the positive y-axis have high moral virtue whereas those on the negative y-axis are those who inherently have moral vice.