Each section corresponds to a video in the lecture series below. The pedagogy follows a conceptual stack of layered mathematical structure from first principles. The initial utility of this page is that it will ideally allow for a user to ctrl-f any technical term and find out:

Blogpost from which section descriptions are taken: Blogpost 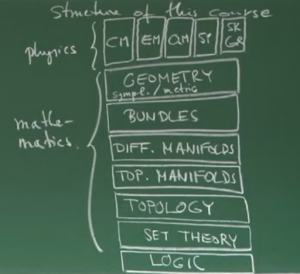 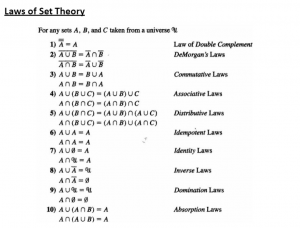 Separations properties: T1, T2 (Hausdorff), T2 an a half; covers and open covers, subcovers and finite subcovers; compact spaces; Heine-Borel theorem (compact if and only if closed and bounded); open and locally finite refinements; paracompactness; metrisable spaces and Stone's theorem; long line (or Alexandroff line); partition of unity subordinate to an open cover; examples; connectedness and proof that M is connected if and only if M and the empty set are the only subsets which are both open and closed; path-connectedness and proof that path-connectedness implies connectedness; homotopic curves on a topological space; concatenation of curves; fundamental group; group isomorphism; topological invariants and classification of topological spaces; examples: 2-sphere, cylinder, 2-torus.

cotangent space and tensor space at a point of a manifold; differential of a smooth map; gradient of a real function on a manifold; dual coordinate-induced basis and gradients of coordinate functions; push-forward and pull-back of smooth maps at a point; push-forward of tangent vectors and pull-back of covectors; immersions and immersed submanifolds; embedding and embedded submanifolds; Whitney's theorem; definition of tangent bundle; proof that the tangent bundle is a smooth manifold.

vector fields as smooth sections of the tangent bundle; vector fields as linear maps on the space of smooth maps; push-forward of a smooth map as a map between tangent bundles; push-forward of a vector field; structure of the set of vector fields; rings: commutative, unital and division (or skew) rings; examples; modules of a unital ring; examples of modules admitting and not admitting a basis; Zorn's lemma; partial orders and partially ordered sets (posets); total order and totally ordered sets; upper bounds; proof that every module over a division ring (and hence every vector space) admits a Hamel basis; direct sum of modules; finitely generated, free and projective modules; homomorphism of modules (or linear maps); Serre-Swan-et al.'s theorem; pull-back of forms; tensor fields as multilinear maps; tensor product of tensor fields.

the complex special linear group SL(2,C): as a set, as a group, as a topological space, as a topological manifold, as a complex differentiable manifold, as a Lie group; the Lie algebra sl(2,C) of the Lie group SL(2,C); detailed calculation of the structure constants of sl(2,C); determination of the Lie bracket between left-invariant vector fields on SL(2,C).

Representation theory of Lie groups and their algebras[edit | edit source]

Reconstruction of a Lie group from its algebra[edit | edit source]

left and right Lie group actions; example: actions from representations; proof: right actions from left actions; equivariance of smooth maps; orbits, orbit space and stabilisers; free and transitive actions; examples; smooth and principal bundles; detailed example: the frame bundle; principal bundle morphisms and isomorphisms (or diffeomorphisms); trivial bundles; proof that a bundle is trivial if and only if it admits a global section.

Local representations of a connection on the base manifold: Yang-Mills fields[edit | edit source]

proof of the equivalence of local sections and G-equivariant functions; linear actions on associated vector ﬁbre bundles; matrix Lie group; construction of the covariant derivative for local sections on the base manifold.