The Theory of Geometric Unity is an attempt by Eric Weinstein to produce a unified field theory by recovering the different, seemingly incompatible geometries of fundamental physics from a general structure with minimal assumptions. For the latest updates on the theory, visit https://geometricunity.org/. 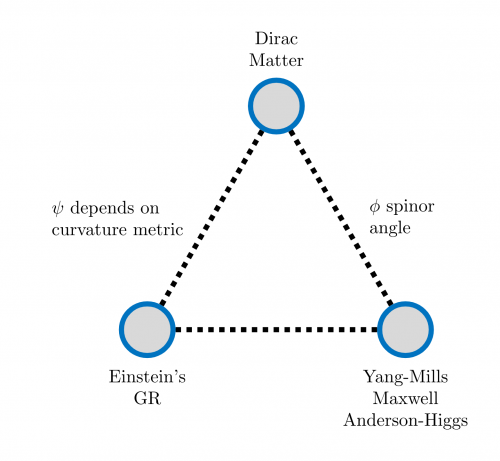 Key guiding question: what are the compatibilities and incompatibilities between these puzzle pieces on the geometric level before the theory is created quantum mechanical.

Further, supposing these $$F$$'s are the same, then why apply two different operators?

Thus the question becomes: Is there any opportunity to combine these two operators?

A problem is that the hallmark of the Yang-Mills theory is the freedom to choose the data, the internal quantum numbers that give all the particles their personalities beyond the mass and the spin. We can allow the gauge group of symmetries to act on both sides of the equation, but the key problem is that: $$P_E(F_{\nabla h}) \neq h^{-1} P_E(F_{\nabla}) h $$. If we act on connections on the right and then take the Einstein projection, this is not equal to first taking the projection and then conjugating with the gauge action. The gauge rotation is only acting on one of the two factors. Yet the projection is making use of both of them. So there is a fundamental incompatibility in the claim that Einstein's theory is a gauge theory relies more on analogy than an exact mapping between the two theories.

Problem Nr. 2: Spinors are sensitive to the metric[edit | edit source]

Observation: Gauge fields do not depend on the existence of a metric. One-forms are defined whether or not a metric is present. But for spinors (fermion fields) this is not the case.

"So if we're going to take the spin-2 $$G_{\mu\nu}$$ field to be quantum mechanical, if it blinks out and does whatever the quantum does between observations. In the case of the photon, it is saying that the waves may blink out, but the ocean need not blink out. In the case of the Dirac theory, it is the ocean, the medium, in which the waves live that becomes uncertain itself. So even if you're comfortable with the quantum, to me, this becomes a bridge too far. So the question is: "How do we liberate the definition?" How do we get the metric out from its responsibilities? It's been assigned far too many responsibilities. It is responsible for a volume form; for differential operators; it's responsible for measurement; it's responsible for being a dynamical field, part of the field content of the system."

Mark-Moon: Can anyone explicate Eric's point about spinor fields depending (in a bad way) on the metric in conventional theories, in a way that is no longer the case in GU? I feel like this is the original idea in GU that I'm closest to being able to understand, but I don't think I quite get it yet.

"The Dirac field, Einstein's field, and the connection fields are all geometrically well-motivated but we push a lot of the artificiality that we do not understand into the potential for the scalar field that gives everything its mass. We tend to treat it as something of a mysterious fudge factor. So the question is, if we have a Higgs field: "why is it here and why is it geometric?""

We may have to generalize all three vertices before we can make progress. That's daunting because in each case, it would appear that we can make an argument that the three vertices are already the simplest possible theories that could live at these vertices.

So if each one of these is simplest possible, doesn't Occam’s razor tell us that if we wish to remain in geometric field theory, that we've already reached bottom?

I would say that there are other possibilities that while each of these may be simplest in its category, they are not simplest in their interaction.

For example, we know that Dirac famously took the square root of the Klein-Gordon equation to achieve the Dirac equation. He actually took two square roots, one of the differential operator, and another of the algebra on which it acts. But could we not do the same thing by re-interpreting what we saw in Donaldson theory and Chern-Simons theory and finding that there are first-order equations that imply second-order equations that are nonlinear in the curvature?

This would be a program for some kind of unification of Dirac's type, but in the force sector. The question is, "does this really make any sense? Are there any possibilities to do any such thing?"

At the mathematical level, an intrinsic theory would be, the older semi-Riemannian geometry. The study of manifolds with length and angle. Auxiliary geometry is what we're going to call fiber bundle theory or modern gauge theory.

Geometric Unity is the search for some way to break down the walls between these four boxes.

What we'd like to come up with is some theory that is intrinsic, but allows us to play some of the games that exist in other boxes. How can we fit? How can we try to have our cake and eat it too? And use all the full suite of techniques that are available to us?

Our perspective is that the quantum that may be the comparatively easy part and that the unification of the geometry, which has not occurred, may be what we're being asked to do.

What will this theory predict?

When will Eric release the next part?

On the Lex Fridman Podcast, Eric states that he may release a paper on April Fool's day, 2021 on the topic of Geometric Unity.

Answer: He is planning on releasing his theory through the traditional route of publishing an academic paper in the near future. He is unlikely to publish in any academic journal that has a paywall - he has voiced concerns over price gouging that many academic journals engage in.