Chapter 2: An ancient theorem and a modern question

In Euclidean geometry, a translation is a geometric transformation that moves every point of a figure or a space by the same distance in a given direction.

Exponents can be thought of as repeated multiplication, meaning:

Multiplying these together we also see that:

This is known as the additive property of exponentiation. It can be written as:

Now, you may notice that this doesn't help if we are interested in numbers like \( 2^{\frac{1}{2}}\) or \(2^{-1}\). These cases are covered in the recommended section if you are interested but are not strictly necessary for understanding this chapter.

For any right-angled triangle, the square of the length of the hypotenuse (the side opposite the right angle) is equal to the sum of the squares of the lengths of the other two sides.

Here are some animated proofs as well as a quiz to test your understanding. 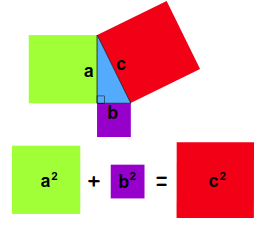 This is the fancy name for the basic geometry we are familiar with where parallel lines do not intersect. The rules or "postulates" of Euclidian geometry are as follows. 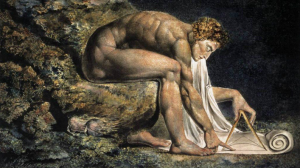 Newton (1795–1805) 460 x 600 mm. Collection Tate Britain. Euclidean geometry is the study of mathematical objects that can be constructed by a straight edge and compass.

A good video explaining these postulates as well as what postulates are can be found here.

Euclid's fifth postulate cannot be proven as a theorem (by assuming only the first four), although this was attempted by many people. Euclid himself used only the first four postulates ("absolute geometry") for the first 28 propositions of the Elements, but was forced to invoke the parallel postulate on the 29th. In 1823, Janos Bolyai and Nicolai Lobachevsky independently realized that entirely self-consistent "non-Euclidean geometries" could be created in which the parallel postulate did not hold. (Gauss had also discovered but suppressed the existence of non-Euclidean geometries.) 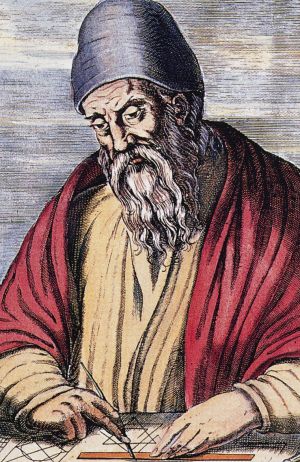 So just remember, \( \pi = 180^\circ \). Further explanations are given in the preliminaries section.

A radian of 1 is the angle which subtends an arc of length 1 on a unit circle, or equivalently, an arc length of r on a circle with radius r.

A type of geometry which can emerge when the fifth postulate is no longer taken to be true. Objects like triangles obey different rules in this type of geometry. For instance, hyperbolic triangles have angles which sum to less than \( \pi \) radians. In fact, we have we have a triangle with an area represented by \( \triangle \) and three angles represented by \( \alpha, \beta, \gamma \) then by the Johann Heinrich Lambert formula:

where \( C \) is just some constant determined by the units by which we measure a give length or area. The units we use can always be chosen such that \( C=1\).

Hyperogue is a video game that takes place on the hyperbolic plane. 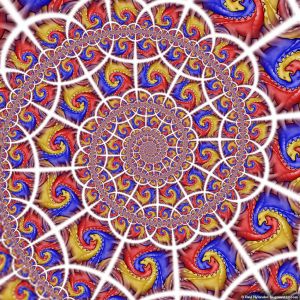 Conformal mappings on the Poincare disk by Paul Nylander
Retrieved from ‘https://theportal.wiki/wiki?title=Chapter_2:_An_ancient_theorem_and_a_modern_question&oldid=12695’
Categories: