Fundamental physics is an unknown world to most people. Equations, symbols, and incomprehensible terms abound, and unless you've studied post-grad mathematics and physics, this world is inaccessible to you. Although there are several great resources to map the way toward complete understanding. Most people will not undertake the journey to understand the source code to the world that we all inhabit.

The goal of the Graph, Wall, Tome project is to solve this problem by building a portal anyone can use to travel to the amazing world that we call fundamental physics.

The name of the project stems from the observation that there are three resources that themselves contain all that you need for an almost complete understanding of the world.

These resources are available to everyone, but will be sought by almost none. A goal of the Graph, Wall, Tome project is to convert these resources into a medium that can be widely disseminated, and which can not be ignored.

This project will require bi-directional information transfer, and the minds of people with many different aptitudes.

The Portal will create a community of people, working together to achieve these aims.

Success will generate yet further insights, opening up a more fundamental understanding of the nature of reality - for the individuals involved, and - for humanity as a whole.

A request:
Try to draw the lines through the three. View it as a unified idea:
The paragraph gets edited.
The wall gets defaced and grafittied.
The Sacred Tome gets Re-Written
But follow the skeins through each.
The graph points to the wall.
And the wall to the Tome.
And the Tome leads to the Search.

The Graph, The Wall, The Tome

The Graph is a paragraph (at the bottom of page 20) from Edward Witten's paper Physics and Geometry:

If one wants to summarize our knowledge of physics in the briefest possible terms, there are three really fundamental observations: (i) Spacetime is a pseudo-Riemannian manifold $$M$$, endowed with a metric tensor and governed by geometrical laws. (ii) Over $$M$$ is a vector bundle $$X$$ with a non-abelian gauge group $$G$$. (iii) Fermions are sections of $$(\hat{S}_{+} \otimes V_{R}) \oplus (\hat{S}_{-} \otimes V_{\tilde{R}})$$. $$R$$ and $$\tilde{R}$$ are not isomorphic; their failure to be isomorphic explains why the light fermions are light and presumably has its origins in representation difference $$\Delta$$ in some underlying theory. All of this must be supplemented with the understanding that the geometrical laws obeyed by the metric tensor, the gauge fields, and the fermions are to be interpreted in quantum mechanical terms.

An updated version of the Graph can be found here.

The following image is carved into a wall at Stony Brook University. It contains many of the most fundamental equations of physics, providing a formulaic representation of all reality.

click here for an interactive version of the Wall. 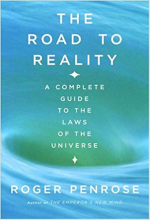 The Tome is the book Road to Reality by Roger Penrose which contains a comprehensive account of the physical universe. To gain an understanding and intuition for the information contained in 'The Graph', and 'The Wall', reading this book will provide a great head-start. With 34 chapters spread over 1000 pages, including diagrams, equations, and descriptions, there are multiple avenues for understanding all concepts.

Study notes for the Tome can be found here.

Reference material by chapter can be found here.